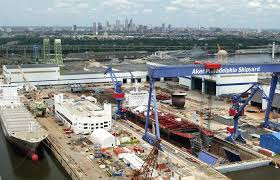 A ship invariably starts its life as a piece of steel. To move from that humble beginning to the huge vessels that today cross the world’s oceans is an art, perfected by specialist metal workers and fitters at Shipyards around the globe. These construction facilities will build and repair any type of ship, from yachts to military vessels, and from cruise liners to cargo ships.

Modern shipyards construct ships in dry docks, also known as building docks, allowing them to be floated out on completion – the nostalgic views of champagne being smashed against the side of a ship as its slides gracefully down the slipway into the water for the first time are now rarely seen. To cater for the huge construction demands, it is not uncommon to see many specialised cranes, dust-free warehouses, painting facilities and very large areas for fabrication of the ships at the shipyard.

Management and organisational skills are essential in the shipbuilding process, as a typical ship will involve the assembly of millions of parts and the employment of a heavy workforce, some of which may be contractors. Only some shipbuilding processes lend themselves to automation, so shipbuilding remains a relatively highly-skilled and labour intensive process. On average the number of man hours required for the production of a ship varies from 300,000 to 1.5 million and the typical production period for a bulk cargo ship may be of the order of six to nine months. Construction of a cruise ship or a liquefied natural gas carrier could take considerably longer at two years or more.