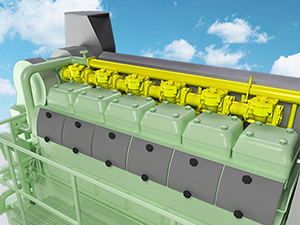 Powering ships across the world’s oceans is no small task. These heavy beasts need a strong force to get and keep them moving. A tour of the engine room on even the smallest of ships is an amazing site as the engine, propeller and various components work in unison to move ships from one port to the next.

There are many parts and workings to an engine and its associated machinery, but a simplified description sees a diesel engine, fueled by marine fuels and lubricants, rotating a propeller on a shaft to move the ship forward. High-speed, four-stroke engines with revolutions per minute of over 960 would usually be found on smaller ships, such as those for coastal navigation, while the low-speed, two-stroke engine with an RPM of below 240 can be found on most of larger ocean-going ships, usually over 30,000 tonnes in weight.

Considerations also have to be made about how to stop the engine from overheating – as it can be running continuously for long stretches – how to start it and the amount of emissions being pumped out. Recent international legislation on air emissions has meant that the sulphur content of emissions has been restricted, which has meant some significant changes to the fuel being burnt and the lubricants being used on the engine.