How Going to Space and the Maritime Industry are Connected- Then and Now! 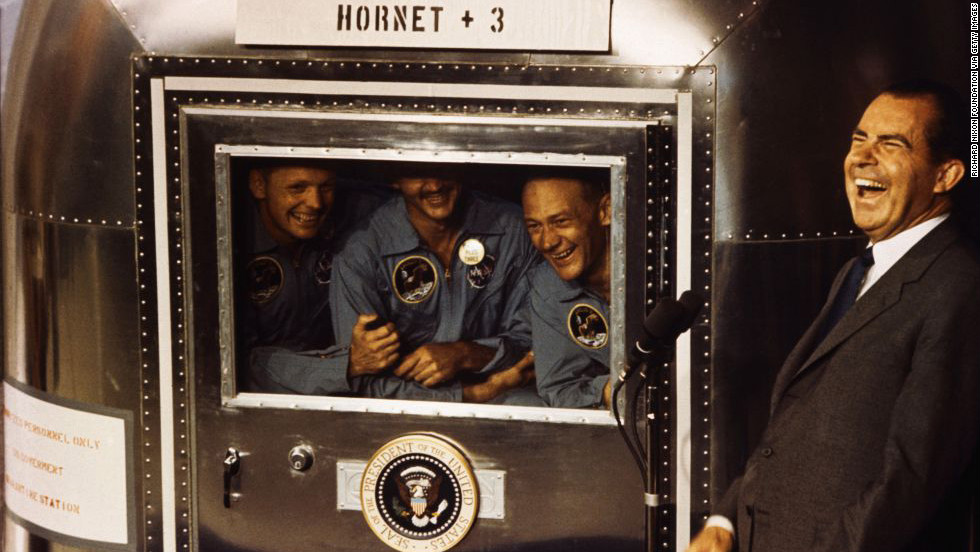 In remembrance of the 50th anniversary of Apollo 11, the USS Hornet Sea, Air & Space Museum are honoring those who played pivotal roles behind the scenes, including the U.S. Navy swimmer who was the first person to greet astronauts Neil Armstrong, Buzz Aldrin and Mike Collins upon their return to Earth.

Hatleberg dropped into the ocean and opened the hatch of the astronauts’ spacecraft after it splashed in the Pacific Ocean on its return, then he provided them with protective clothing in case they had picked up lunar pathogens during their epic journey.

Hatleberg also got the astronauts hoisted up into a helicopter that ferried them to the Hornet. President Richard Nixon was aboard the ship, waiting to greet the men!

To Learn more Visit: Apollo 11’s 50th anniversary to be marked aboard USS Hornet, HORNET PLUS 3 - Recently discovered Apollo 11 Splashdown film., One Small Step for Man, One Giant Leap for the Merchant Marine

Before two of the Falcon Heavy engine cores could gracefully land on twin launchpads in a display rivaled only by synchronized divers, Elon Musk and the SpaceX team first had to prove their rockets could come back to Earth in a controlled and steady manner.

While SpaceX's first touchdown in 2015 happened at Landing Zone 1 in Cape Canaveral, SpaceX still wanted to be able to softly land (and quickly recover) rockets on a floating platform in the ocean—traditional landing pads are small and expensive, and the oceans are vast. SpaceX succeeded on April 8, 2016, landing the first stage of a Falcon 9 rocket on the droneship Of Course I Still Love You in the Atlantic Ocean.

Since then, landings on Of Course I Still Love You and its sister ship in the Pacific Just Read the Instructions have become more common, helping SpaceX reuse the expensive first-stage engine cores of its Falcon 9 rockets. The drone ships are especially important for launches carrying heavier loads to higher orbits, as the rockets use more fuel on those launches and have less available to guarantee a safe landing on dry ground. Though the landings get all the attention, the ships—also called Autonomous Spaceport Drone Ships or ASDS—are pretty amazing, too!